Vegan Living for the Soul

This last weekend, I gladly participated in the celebration of Canada’s equality for everyone, regardless of sexuality or gender identity. Most people don’t know this about myself, but I identify as pansexual (gender-blind: sex and gender is insignificant for attraction or love) and genderfluid (ability to fluctuate among genders). When I experienced my spiritual awakening, I discovered that being queer is actually a spiritual gift! This is because I look past the societal norms of love and instead simply love an individual. I am not given the gender associated with my sex nor am I limited to one gender, but my gender encompasses all the energy within my spiritual self. All of this is quite liberating in my opinion. So this year I utilized pride day to search for further spiritual insight and of course I was reminded of the beautiful energy of compassion and acceptance. This energy opens our hearts and I think we can extend this compassion to our non-human friends as well. The parade involved several different local and nationwide organizations and companies who support Pride.  All the floats were colourful and high-spirited so they were fun to watch! I even noticed Trojan condoms had a float! Sadly, these condoms are not vegan. I know it’s weird. How can condoms not be vegan?! When I found this out, I couldn’t believe it! Most condoms contain casein (milk derived) and ingredients used to make condoms are usually tested on animals. There are some vegan condoms out there… I found to quite like Glyde condoms. Unfortunately, I have to order them online because I can’t seem find them anywhere in Canada! 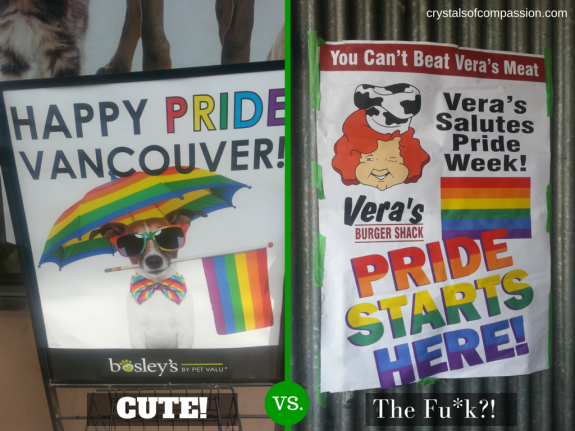 I walked down Davie St. to get to the parade and it was full of rainbow signs and flags, more than the usual! The picture on the left was taken outside a pet store. I thought it went well with my theme of animals which is why I wanted to include it in my blog! However, the sign on the right caught my eye because it had quite the opposite energy. As you can see in the picture, Vera’s Burger Shack takes pride their meat. Though I don’t understand where queer pride plays a role in that. It pains my soul to know that there are billions of farm animals who can’t pride in expressing their life because they are slaughtered for meat.

After the parade, my partner and I danced our hearts out at the queer-friendly night club! It was a fantastic way to finish the day. What better way to express yourself than to dance?!

It was a short, but fun day! It was just one day out of the year to celebrate Pride, but everyday we all should be proud of ourselves, no matter what our sexual or gender identity happens to be. I know I’ll be #ForeverProud! 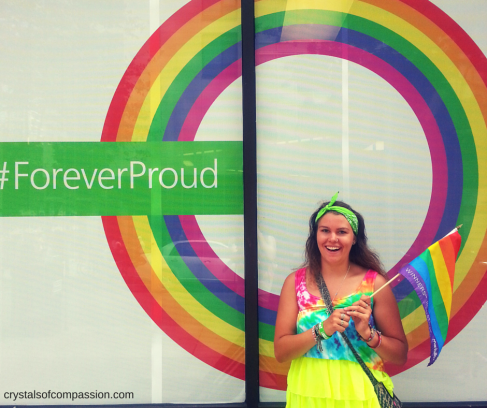